Before Scott Westerfeld made himself famous writing about teenagers who don't fit in and airships, he wrote a science fiction duology that brought up some fascinating ideas about immortality and evolution.  That would be Secession, beginning with The Risen Empire. 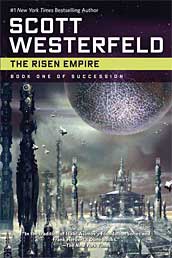 Humanity has not only conquered the stars, it has conquered death as well.  But even in this, there is conflict.  The Imperials have beaten mortality by biological means, and everlasting lfe is granted to those who can work their way up the social and political ladders.  The Emperor discovered the secret to eternal life while trying to cure his sister, known as 'The Reason.  As he is the one who has bestowed upon the Empire the gift of life after death, he is both the emperor and also the leader of a personality cult surrounding him.  And as the first 'Risen,' he will conceivably rule forever.


The Rix, on the other hand, have gone another route to immortality.  They have embraced technology, creating a race of women-machine cyborgs who exist to further the spread of their religion.  Planetary computer systems have evolved to the point where they can develop their own AI mind.  The Rix see it as their duty to help seed these minds on already-developed worlds by inserting a virus-like piece of coding into the planet's telecommunications system.  Given just a bit of time to move undetected, this nacient consciousness can insert itself into every piece of technology in the system.  It's not a malicious entity, per se, but it is persistent, and the Risen Empire has declared the Rix to be an illegal cult.


We start the tale with Laurent Zai, a fierce Emperialist and captain of the Imperial Frigate Lynx.  He has been sent to the Legis system and when we join him, he is in the middle of the worst hostage crisis the Risen Empire has ever faced.  Somehow, the Rix have gotten ahold of 'The Reason' and are holding her and her retinue while they seed a new collective mind on the planet.


Nara Oxford is a senator in the Risen Empire, though very unlike the others who share her title.  For one, she is a member of a sect that has renounced eternal life, instead opting to live out her 200 or so natural, subjective years  and then move on to make way for the new generation.  This is especially odd among Senators, who are granted a symbiote and eternal life as a matter of course.


She also had a fairly rare bad reaction to the syneasthia augmentation that most citizens get as children.  This allows the user to commandeer the sensory processing power of the brain to layer different feeds over one's field of vision, letting Nara see news feeds, proposed legislation and other Senators' approval ratings all at once, in front of what is actually going on in front of her.  Side effects do happen, and along with this new processing ability, Nara received a very strong, very debilitating degree of empathy.  Rendered mad as a youngster, she uses a sort of apathy drug that she controls through a device on her wrist to let her have some peace around other people.


What follows is a fascinating combination of a thought exercise, a political thriller and a space opera, with a few love stories thrown into the mix as well.


Laurent and Nara meet at a political function, where Nara is the newest Senator and Zai is the youngest person ever made Captain of a starship.  A romantic relationship begins, and they decide to pursue it, even though they both know that the Time Thief of relativistic travel and the cryogenic sleep that Senators engage in between sessions will cause problems.


To choose Laurent Zai and Nora Oxford as the 'main characters' does a grave disservice to the other points-of-view that we enjoy throughout the story.  We see the world and the events unfolding through a dozen eyes, from the Empress herself, to a Rix warrioress during the incursion, and beyond, to the slightly too intelligent AI that runs Nora's household.  Even if we only inhabit the person's mind for a few pages, to have all the different points of view shown broadens the world Westerfeld crates immeasurably.


The problem with reviewing the plot itself is that the book jumps between points in time and between characters so well that to give any more information would be to ruin parts of the book, which would be a shame.  I'll simply mention that the book touches on such topics as where the lines between honor and love lies, what qualifies as life, and whether a civilization can truly advance when the old guard need never step down.


It's a shame that Westerfeld gained his fame writing books about teenage ennui when he obviously has so much talent in writing adult fiction.  The world thankfully gets revisited in another Secession book, The Killing of Worlds, and hopefully he'll come back to adult science fiction someday soon.


Highs:  Rarely have I seen a novel examine so many facets of future life, without long information dumps, but Westerfeld manages to give us all the information we need through the narrative itself.


Lows:  Fair warning: there is a very cruel cliffhanger ending here.  Have the next book on hand.


Verdict:  Perhaps not for the typical Westerfeld fan, though they might be the ones to benefit most from it, this is a book that will leave you thinking about the questions it raises for days.


Further Reading:  The Killing of Worlds, Embassytown
Posted by ebooksgirl at 9:56 AM