Yotsuba finds out how udon is made, and Juralumin gets into trouble in Yotsuba&! Volume 11. 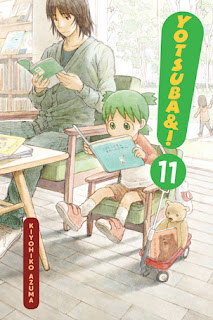 Note: Yotsuba&! Volume 11 is part of an ongoing series. Check out the review of Volume 1 here, and Volume 10 here. Otherwise, read on!
Read more »
Posted by ebooksgirl at 8:40 PM 0 comments

Trends in media tend to go through phases. At first, it's the hot, new, innovative thing. Later, copycat series spring up like mushrooms after a rain, and the quality of the entire genre suffers. Eventually, a writer decides to turn the trope on its head and create a satire. 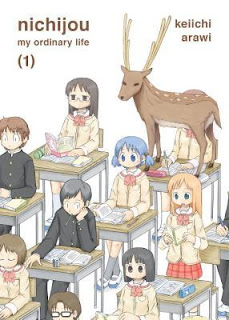 We certainly have all the expected characters here. There's Yuuko, the energetic girl who's nevertheless too lazy to do her homework and constantly copies off of her friends. There's Mio, who has a secret crush on a male classmate, and is constantly struggling to hide her yaoi art and manuscripts from her friends.  Nano just wants everyone to believe she's a normal girl, although the windup key on her back tends to give away her robot nature, and Professor, the eight-year-old who created her. There's even Mai, who moved here recently, and is quiet with glasses.

With a group of girls like this, there's plenty of room for hijinks to ensue, and they certainly do. Whether Yuuko's daydreaming out the window lets her spy their principal wrestling a deer, or Nano's despair at Professor replacing her limbs with random items like Swiss roll cake, the gags are fast and furious.

There's plenty to love here, and plenty of room for the series to grow. From minor characters getting their time to shine to more explanation of Professor, hopefully Arawi can keep it fresh and interesting for years to come.

Highs: The manga never tries to take itself more seriously than it should, which is exactly the attitude a series like this should have.

Lows: There are hints at storylines that may continue throughout the series, but none of them get quite enough screentime for the reader to care one way or the other.

Verdict: nichijou Volume 1 is a fun, satirical look at the adorable schoolgirl genre.