Manga Monday: Does Doctor Black Jack perhaps have a soft spot for children?

The more human side of Black Jack comes out, whether dealing with lonely widows or treating young children in Black Jack Volume 3. 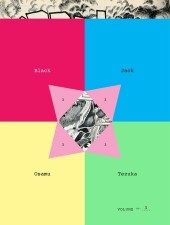 In 'Pinoko Loves You,' Pinoko has only been with Black Jack for a few days, but she's already declared herself to be his wife.  While fighting about her "age" and "cooking abilities," Black Jack receives a call from a parent who is a bit less distraught than he ought to be.  His son has been run over by a car, and Black Jack is the only surgeon in the area close enough to be able to help in time.  He asks Black Jack for help, but balks at the $3,000,000 that he quotes him for the surgery.  The father manages to bargain Black Jack down to $2.2 million, but the case is much more serious than Black Jack thought.  Several organs have been crushed beyond repair, and the boy needs a kidney if he is to have any hope for survival.  Will Black Jack be able to find one in time, and will he make good on his threat to take Pinoko apart and put her back in the culture medium?

We meet a young medical student about to take his boards in 'Devotion to Medicine.'  A young man went into medicine after his mother, father and sister all died of cancer.  His one dream is to save a patient or two from the scourge that has taken so many from him, but when he passes out during his exams, it looks like he might not have the time.  Black Jack diagnoses it as pancreatic cancer that has spread, and gives him less than a year to live.  Will the new doctor have enough time left to help his first patient through liver cancer, and see her recover?

But the final story in this volume is the most emotionally draining of the series yet.  'Baby Blues' is the story of a mean girl.  Rich but neglected by her politician father and socialite mother, she and a group of other girls have fun attacking and mugging people on the streets.  When one of the girls steals a locker key from a lady, they head to the train station to see what she might have left there.  They open the locker to find a newborn baby, still whimpering softly.  The rest of the girls wash their hands of the situation, but she has some sympathy for the abandoned child and starts going to the train station to feed the baby each night.  How will Black Jack react when this strange situation, based on actual abandoned babies in the 1970s, wanders into his office, and what will happen when the reformed mean girl gets grounded for stealing money to pay the baby's medical expenses?

In each of these stories, as well as others in this volume we see the heart behind the harsh mask that Black Jack customarily wears.  Both he and Pinoko continues to grow, and it's a pleasure to watch.

Highs:  Only Black Jack could do surgery on himself with hyenas circling

Lows:  Some of the stories teeter on the edge of being preachy, but although we see Osamu Tezuka's opinions come through, it's not too heavy-handed

Verdict:  A great look in to the heart of our favorite heartless doctor.