When the military takes over, there's only so much a person can take

In the near future, a virus strikes North America.  Large swatches of the population die, and hospitals are overrun with patients.  Border states' hospitals are hit especially hard, with people from all  over Mexico and points south fleeing to the US for heathcare.  Eventually, the country becomes completely isolationist and closes the southern border, building a wall and stationing military outposts in some of the former border towns.  Many of these towns have been abandoned, any people remaining within them no longer considered United States citizens. 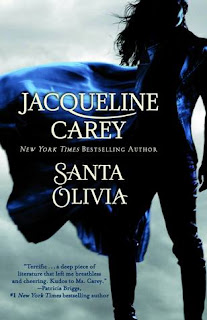 Welcome to Santa Olivia, the titular town in the novel by Jacqueline Carey.  The own has been under military rule for a generation.  The children growing up there now have no memory of a city not patrolled by military men with their egos and their cruelties.  They don't remember all the buildings of their town being full, with a working power grid and hot running water.  They have never lived in a city with full grocery stores, proper schools and churches, and the ability to come and go from town as they please.

There was one outside visitor, though.  A man who, at first, didn't say much.  Just showed up at the diner and had a few plates of chorizo and eggs.  But Carmen knew there was something different about him.  Something about the way his uniform didn't fit quite right, the way he moved, the way his eyes darted around the diner.  Not scared exactly, but aware.  Very aware.

He didn't stay long.  Longer than he meant to, though.  The military was looking for him too hard to stay.  But he stayed long enough to tell Carmen about his origins.  About his plans to meet up with other people like himself in Mexico.  About how to care for the baby he left behind.

That baby grew up to be Loup Garron.  She took after her father quite a bit.  Faster than other kids her age.  Stronger, too.  Completely fearless.  So fearless that, as a child, her half-brother Tommy had to teach her how to think about consequences, so she wouldn't do things that most sensible children would be afraid to.  Standing upright on the peak of a slanted roof, and leaning over to see, for one.

There's one way out of this place, though.  The General may be corrupt as hell, and let the street gangs run the civilian part of town.  He many let his soldiers do whatever they like in town, and always side with them if a civilian has the audacity to complain.

But he loves boxing.  If a civilian takes a prizefight and loses to one of his soldiers, he still walks away with a purse large enough to give his family a certain measure of comfort that his day job wouldn't be able to afford otherwise.  The true prize, if a civilian were able to pull off a victory, would be two tickets out of Santa Olivia, back North to the real world.

As things get worse and worse for the people of Santa Olivia, they start to look for a hero.  The priest in the Catholic Church ins't a real priest, but he runs a free lunch each day for the citizens who have fallen on hard times, and he runs the orphanage where Loup eventually ends up.  The gangs are too busy with their night clubs and black market to challenge the status quo.  It'll take someone with nothing left to lose.  With the innate skills to beat a trained soldier in the boxing ring.  Someone born on Santa Olivia's name-day, and can pass for the Saint herself in a blue dress and white kerchief, holding a basket of plenty.

Jacqueline Carey is more famous for her epic fantasy novel Kushiel's Dart and the series that it spawned.  This foray into a sort of post-apocalyptic urban fantasy is quite well done, though.  The characters are fleshed out, from the leader of the boxing club to the smallest of the orphans at the church.  The characters behave properly in their situations, and even the military behaves with a certain kind of military logic.  Even the townspeople, who learn to live with the military, the shortages, and the strange specter of war looming over them.  It's a nice turn on the 'chosen one' type of story, with enough logic behind it that it doesn't feel like the characters just fell into place.

Highs:  For once, the other-ness that most teens go through is real, not just imagined.

Lows:  I wish a bit more of the world at large was revealed here.

Verdict:  Not your typical Carey fare, but a fascinating novel with a revenge edge.

Further Reading:  Saints Astray, The Painted Boy
Posted by ebooksgirl at 11:17 AM