If the pantheon was real, they'd probably have to advertise like everyone else.

Thankfully, in our world, any gods and goddesses that might exist take a very hands-off approach to their followers.  Even if a person has an altar to Zeus in his living room and provides regular tribute and sacrifices to the Thunder God, he is very, very unlikely to get a lightning bolt thrown down to smite a vindictive boss.  In fact, as hard as many people try to blame natural disasters and other coincidences on the pantheon or witchcraft, no one has come down to claim credit for their handiwork in a very long time. 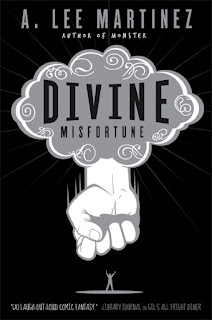 However, in Divine Misfortune by A. Lee Martinez, that lightning bolt is quite a bit more likely.  The pantheon exists, and many of the gods listen quite closely to their followers.  Being the follower of a god, however, has quite a bit of bureaucracy behind it.  Which is probably a good idea, seeing as most gods would frown upon polytheism.  Making it all nice and legal also makes clear the consequences for things like human sacrifice and the rights and responsibilities of all involved.

Teri and Phil have been devout atheists all their lives.  But as they see their coworkers excel, while their own lives are comfortable but middling, they wonder if perhaps their lives might be easier with a god in their corner.  So they head to Pantheon.com and page through some profiles to see who might give them just a bit of an edge.

They end up finding a rather obscure god named Luka.  A racoon god with the domain of luck, he requires very little in the way of tribute, and in kind offers just a bit of an increase in the luck department.  So with the paperwork filed with the Bureau, and their altar set up in the corner, Teri and Phil get ready to receive a bit of luck in their lives.

Then the doorbell rings.

A raccoon-headed being wearing a distressingly loud Hawaiian shirt and carrying a suitcase stands on their doorstep.  It turns out that Luka (call him Lucky) doesn't much like the Mount Olympus set and would much rather stay with his followers.  And since the Robinsons have a spare bedroom and all, well, who wouldn't want a god crashing with them?  Especially a god who  lets his god buddy Quetzalcoatl crash on their couch and throws parties that breach their Home Owner's Association agreement.

What follows is a rollicking ride through a modern-day world not unlike our own, but with the chaos that only a large group of immortal, powerful and supremely petty beings could bring.  Not every god is as benign and easygoing as Lucky, either.  While most gods follow the rules of modern society, in any group of beings there will be the antisocial elements.  These gods revel in the human sacrifice and suffering that the less moral devotees are willing to provide, in exchange for money and power at levels that could hardly be acquired on one's own.  On top of that, when dealing with immortals, issues like heartbreak, revenge and general bad blood can last a very, very long time.

Highs:  Who would have thought that Quetzalcoatl would have mellowed out into such a cool dude?

Lows:  It's hard to tell from the beginning what kind of story you'll be getting, but if the reader is willing to get past that, it's well worth the trip.

Verdict:  The perfect story for fans of the more absurd science fiction and fantasy, or anyone who took long car rides listening to The Hitch-Hikers Guide to the Galaxy radio plays.

Email ThisBlogThis!Share to TwitterShare to FacebookShare to Pinterest
Labels: A. Lee Martinez, fantasy