After his father's death, a young man's world begins to crumble around him in K W Jeter's Infernal Devices: A Mad Victorian Fantasy. 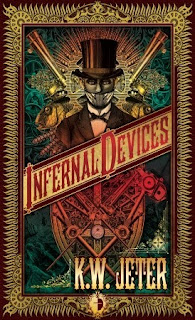 When George Dower inherited a watch shop from his absent father, he knew it wouldn't be the best fit for him. A basic understanding of such devices is hardly enough to make sense of the amazing inventions found in his shop, and a disaster involving a clockwork choir in a nearby church was almost enough to ruin him once and for all. But for the time being, Dower's been getting by with the simple repairs he's able to do, along with selling off some of the more complex items he's found in the workshop.

His bubble of genteel poverty bursts the day a strange man enters the shop hoping for a repair. Described as 'a murderous savage Ethiope' by his loyal, if somewhat dramatic, assistant Creff, he's brought a small chest with a device the likes of which Dower has never seen and certainly cannot repair. Nevertheless, the Brown Leather Man isn't willing to take no for an answer, and leaves the device, along with prepayment, behind.

After a break-in by perhaps the strangest pair of confidence men ever to grace Victorian England's streets, Mr. Dower's life simply derails. From The Church of Saint Monkfish, to a violinist with an ego problem, to a nobleman's delusional plan to destroy the Earth, it's a wonder that poor George doesn't simply give up and go mad. It would certainly be the easier course of action, especially after the Ladies Union for the Suppression of Carnal Vice starts chasing after him.

KW Jeter may be best known for coining the term 'Steampunk' as a tongue-in-cheek reference to an earlier work in the late 1980s, but his stories deserve more credit than this. Constant action, curious characters and a splendid streak of dark humor makes Infernal Devices a modern steampunk classic.

Highs: So many scientific ideas, viewed through the quasi-scientific lens of the Victorian age, come together beautifully at the end

Lows: The Angry Robot ebook edition is full of spelling and formatting errors, so a paper copy would be the way to go here

Verdict: One of the earliest modern works of steampunk fiction, with a story that holds up well, this is a quick read that fans of the genre should definitely check out