When a video game is based off of a book, or vice versa, usually one or the other suffers for it.  Either the player can't tell what's really going on in the characters' heads, or or the book is paced so much like a game that it becomes distracting. 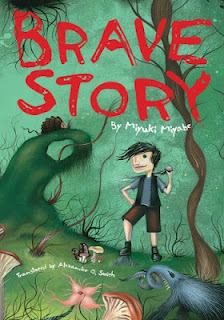 Thankfully, Miyuki Miyabe created an amazing story that has survived many retellings in Brave Story.

Wataru Mitani really is just a normal boy going through normal boy problems.  As is sadly too common in Japan, his father is fairly absent from his life, due to the demands of being a salaryman.  At the outset of the story, though, his father announces that he is leaving the family.  Wataru's life continues to crumble around him as his mother tries to kill herself and is left in a coma.

Desperate to change his situation, he ends up in the land of Vision and discovers that if he can complete his quest, he can change his life in the real world as well.  But he has competition on this quest.

The best part of YA Japanese books is that they don't talk down to their readers.  In a nation where children meet their salaryman parents at work to make sure the come home at a reasonable hour, lest they succumb to the national plague of karoshi, kids understand a lot more than some adults give them credit for.  In the US, the surge in YA books like The Hunger Games and The Midnight Palace are starting to draw up this market, but even these books keep things relatively simple for the reader.  There's a clear bad guy or something to struggle against.  Even if there is some inner turmoil for the main character, there's still a clear path to be taken.

There is much more introspection in Brave Story.  Wataru truly grows as a person throughout the book, and is fundamentally changed by the end.  And he changes in a way that one would expect of a boy in this situation.  There's no logic gap in why he's behaving in the manner he is.

Beyond that, though, this certainly is an adventure story.  Laid out rather like a standard RPG, there's a quest to gather the five gemstones.  There's side missions along the way that help further the plot and character development.  There's helpful natives that tag along, seemingly just to see what the Traveler is up to next.  And there's an antagonist, though not precisely and enemy, that Wataru needs to interact with and defeat.

Now, I don't mean to oversimplify the book.  Just because parts of the structure are formulaic doesn't diminish the story as a whole.  On the contrary; it makes perfect sense that the imaginings of a boy whose primary entertainment is video games would draw heavily from those themes.  And readers who have played and loved their stories in that format should be comfortable and enjoy this immensely as well.

Highs:  Miyuki Miyabe, though not so well-known in the US, has written quite a few books in Japan and it shows in the pacing and character development

Lows:  A reader not familiar with RPGs might be a bit confused with the plot design

Verdict:  A grand adventure, and a good selection for reluctant readers

Further Reading:  Book of Many Ways, The Midnight Palace
Posted by ebooksgirl at 4:01 PM