Manga Monday: The beauty of Mongolia reaches beyond Asia

Mr. Smith embarks on his own - and gets himself into all sorts of trouble - in A Bride's Story Volume 3. 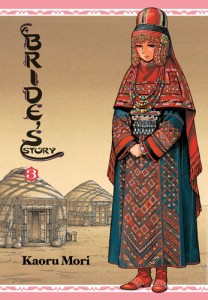 Note:  A Bride's Story Volume 3 is, of course, the sequel to A Bride's Story Volume 1.  The review of A Bride's Story Volume 1 is here, and the review of A Bride's Story Volume 2 is here.  Otherwise, read on!
Mr. Smith is having some trouble meeting up with his new guide.  Not only that, but while he scans the market for him, his horse and all of his belongings disappear.
The horse of another market visitor has gone missing as well.  Her name is Talas, and that horse is all she has left of her husband.
Distraught, Mr. Smith and Talas go to the town leader who, to keep the good name of his market from being sullied, quickly locates the missing animals and items.  Because it is getting late, Talas invites Mr. Smith to her home for dinner, where she lives with her mother-in-law and the sheep that they herd.  Eventually, seeing that this is an opportunity to learn about the culture of this area as well, Mr. Smith reluctantly agrees.
In a hard land full of hard stories, Talas has had even more difficulties than most.  She married well, to the first son of the household.  Tragedy strikes, again and again, and eventually only Talas and her mother-in-law are left, with no heirs.  They've already had to sell off some of their sheep, simply because it's too much work for just the two of them to handle.  Both women are thrilled, though, to have a visitor to take care of, and Mr. Smith accompanies them on their chores and hears their stories.
But Mr. Smith's troubles are far from over.  Back in town by himself, the townspeople grow suspicious of the European man asking questions.  Eventually he gets himself detained by some overly enthusiastic guards.  Baffled by why a grown man would be wandering around taking notes about people if he wasn't a spy, Mr. Smith finds himself in a cell while they figure out what to do with him.
Word travels fast among the nomadic tribes, though.  Perhaps some friends, both old and new, will hear about his troubles and come to vouch for him.
This volume has much more action than the last two.  In fact, more happens in some chapters here than in the first volume as a whole.  And Mori shows that she can competently handle as much plot as she wants to throw at us.
But where she still truly shines, as alwys, is in the breathtaking scenes of natural, everyday beauty.  In the view of Talas' hair blowing in the wind, or a young couple on horseback riding into the distance, Mori's attention to detail and intricate penstrokes will always stun readers accustomed to blank shojo faces and screenprinted patterns.  And this volume ends on such a note of melancholy and resignation that the reader will find the months-long wait for Volume 4 much more painful than usual.  But if the wait brings more of the stunning artwork and compelling stories of people going about their lives in a culture of yesterday, then the wait will be well worth it.
Highs:  Mr. Smith comes into his own here, instead of just being a nuisance bothering other characters and imparting cultural notes.
Lows:  It's certainly the culture of the area and the time, but the treatment of the women is hard to watch sometimes.
Verdict:  More beauty, and more cultures, makes this a can't miss.
Further Reading:  Emma A Victorian Romance, The Story of Saiunkoku
Posted by ebooksgirl at 11:33 PM