A brief look at wearing kimono in modern society

As much as Japan as modernized and westernized in the last fifty years, there is still something of the classical there.  New apartment buildings have risen next to old Shinto shrines, and the spirits of times gone by seem to meld into the fast-paced life of modern Japan.  As fashions and trends move ever onward, there will always be those who treasure the traditional. 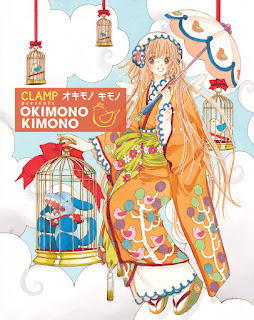 Mokona, of CLAMP fame, has brought her love of the kimono to the manga reader in CLAMP Mokona's Okimono Kimono.  Having decided to wear kimono in as many common-day situations as possible, this book demonstrates both her love of kimono as a piece of art, as well as the practicalities of wearing a style of dress that seems, on first glance, to be completely at odds with modern life.


Fans of CLAMP's manga will certainly be thrilled with the first section, dedicated to kimono art.  Mokona has tried her hand at designing several kimono based on CLAMP series.  From WISH to Tsubasa, Mokona shows how nearly any mood or setting can be depicted in the kimono art form.


The book then shows how to properly accessorize a kimono, both in the traditional style and a more modern look; shows the author in a variety of modern-day situations in kimono; and interviews a few people about their experiences as well.  There's also a short manga story at the end, and an essay by one of the other members of CLAMP about her experiences with kimono.


Mokona's Okimono Kimono shows the uniquely Japanese art form of the kimono in settings that I would never expect to see them in.  It's hard to make a good analogy to American fashion with this, because no one would expect to see traditional Western European clothing walking down the street.  Mokona deserves some credit and respect for trying to keep this part of Japanese history alive with its younger generations.


Highs:  Mokona's accessory collection makes me want to plan a trip to the antique mall and find some adorable vintage pieces of my own.


Lows:  I wish there was some context to these pictures, as I have no idea if the reaction of the people on the street would be closer to someone wearing a 1960s housedress or leiderhosen.


Verdict:  A very quick read, and one of the few kimono books to be found marketed to the manga crowd, it's an interesting of somewhat incomplete read.


Further Reading:  Alter Ego: Avatars and their Creators
Posted by ebooksgirl at 9:00 AM