The zombie apocalypse marches on, and so do our heroes

As our heroes begin to find more bodies than survivors on ships, they turn an eye to dry land in John Ringo's To Sail a Darkling Sea. 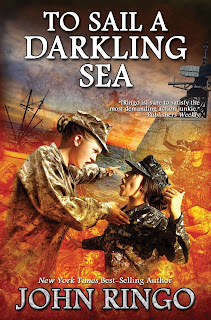 Note: To Sail a Darkling Sea is the second book in the Black Tide Rising series. For a review of the first book, click here. Otherwise, read on!

As time marches on, it becomes less and less likely that Wolf Squadron will find any more survivors on boats. Clearance on the larger boats becomes more and more depressing, as only people lucky enough to barricade themselves into a room with six months of stores as well as access to fresh water have any chance of survival. The next step is to gain traction on land, preferably with a lab capable of making attenuated vaccine.

Up until now, Wolf Squadron and the people they have rescued have been able to make do, clearing new boats and taking care of the lame and lazy, But as they clear more ships, and especially as they clear military vessels, it becomes apparent that they need to incorporate some sort of military mentality and ranking system, else turn into a merry band of pirates.

All our favorite characters are back in this volume, to a greater or lesser extent. As always, Faith steals any scene she's in, but she gains quite a bit of maturity and depth. Sophia grows into her role as a leader of men, and as much as their father Steve is a reluctant commander, he still knows how to get things done.

As is the case with many second books, there is more character development than action in this book. Thankfully, Ringo writes such interesting characters that he can carry a novel on this alone. We get to see a big-shot Hollywood producer cut down to size, a retirement home full of Spanish-speaking elderly who need to be rappelled down a cliff, and a wonderful woman named Olga who would fit perfectly into one of Ringo's other series.

Ringo does an excellent job of exploring the problems of turning the truly random people that Wolf Squadron has rescued into a cohesive fighting force. As military and civilian cultures clash, our leaders have to keep everyone focused on their goal: reclaiming the world for the survivors.

Highs: No matter how much she tries, and no matter what the world throws at her, in her heart Faith is a 13 year old girl who wants to go to prom.

Lows: It makes sense that this book would be slower, with more interpersonal struggles and planning for their next campaign, another really frightening, zommbie-esque scene like the last concert in New York would have been nice.

Verdict: Ringo's excellent writing, sympathetic characters, and thread of dark humor keep this book from feeling like a placeholder, and has the reader eagerly anticipating the next installment.

Further Reading: Islands of Rage and Hope, Princess of Wands, V Wars
Posted by ebooksgirl at 8:00 AM