Manga Monday: A maid's situation always depends on others

William gets his father's official word of disapproval of his relationship, and Emma faces new hardships of her own in Emma: A Victorian Romance Volume 2 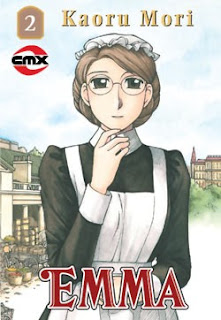 Note:  Emma: A Victorian Romance Volume 2 is, of course, the sequel to Emma: A Victorian Romance Volume 1.  The review for Emma: A Victorian Romance Volume 1 is here.  Otherwise, read on!
In this volume, Emma and William finally get to go out for the day together.  William gets them tickets to The Crystal Palace, a huge steel and glass building like none other that was originally built for the first World's Fair.  Having been reconstructed in London, it's filled with exhibits from around the world.  In one day, a visitor can walk through Egypt, Rome and Paris, and still have time to take in the tropical birds and plants throughout.  This would certainly be the first chance that most Londoners would have had to see anything like this, and even with a bit of a mishap at the end of the day, it's still a magical outing.

William welcomes his family home from summering in the countryside as well.  The elephants who have taken up residence out front receive mixed reactions, though, as do his intentions with Emma.  His youngest sister, especially, seems mad that William hasn't found at least a baronet for himself.  But it's the word of the family's patriarch that matters the most, and that doesn't look too promising either.
But perhaps the biggest challenge is the one that Emma faces.  Mrs. Stowner, her employer, teacher, and second mother, is starting to get on in years, and finally ends up bedridden.  But beyond losing a friend and mentor, Emma faces the prospect of losing the only home she's known since she was kidnapped.
Emma: A Victorian Romance does a very nice job of not sugarcoating the era.  Even though Emma now leads a bit of a charmed life for a maid, there's no pretending that she'd be able to keep the rented home after Mrs. Stowner passes on, or any nonsense like that.  For better or worse, Emma is a woman alone in the world, but armed with the education and skills that Mrs. Stowner as given her, she'll be able to make a go of it on her own.
Highs:  Mori once again outdoes herself with the amazingly detailed artwork, especially at The Crystal Palace
Lows:  The predicament that they get themselves into at The Crystal Palace ought to have had more repercussions.


Verdict:  A lot happens to our characters in this volume, and it sets us up nicely for the next volume