Who said that superheroes needed to be humaniods?

Superheroes team up all the time.  Marvel has The X-Men and The Avengers.  Likewise, DC generally has a Justice League and a Justice Society active, with revolving rosters of members.  Even the sidekicks occasionally strike out on their own, forming the Teen Titans and Young Justice and the like.  But why should the humanoids be the only ones with friends?  And so, The Pet Avengers was born. 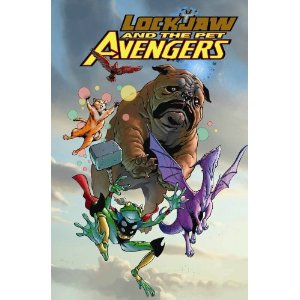 Meet the Pet Avengers!  When Mr. Fantastic goes to the Inhumans  to look for the Infinity Gems, Lockjaw happens to have found the Intelligence Gem.  With his boosted smarts, he decides to go find the Gems for Mr. Fantastic himself.  But he knows that he'll need help, so he goes and finds more Avengers to help him.
Enter Throgg.  Formerly a human, he was turned into a frog by a gypsy and took on the name Puddlegulp.  He found a shard of Thor's hammer, and used it to help defend his colony of frogs from a group of rats.  Taking on the mantle of Thor, and using the name Throg, he is the first animal Lockjaw goes to for help.  Because of the Intelligence Gem, Lockjaw is able to project his thoughts to Throg, who becomes the second-in-command and voice of Lockjaw.
Hairball is another of the more outgoing members of The Pet Avengers.  The pet of Speedball, he too has the power of kinetic energy.  He also has the traditional hatred of dogs (except Lockjaw) that a cat has.
So, of course, Lockjaw includes the rather...airheaded Ms. Lion.  Ms. Lion means well, but as simply the puppy owned by Peter Parker's aunt May, he doesn't have the intelligence or powers of the rest of the team.  His heart is in the right place, though, and if the intelligence-augmented Lockjaw says that he's needed, he must have a role to play in all this, too.
Along with Kitty Pryde's companion dragon Lockheed and the falcon Redwing, the Pet Avengers head off to find the rest of the Infinity Gems.  They end up travelling to all sorts of places, thanks to Lockjaw's teleportation powers, from the underwater domain of Sub-Mariner to the Savage Lands.  Along the way, in the spirit of team-ups of any species, the learn to appreciate each other and work together as a unit.  It may have started as a novelty, but the Pet Avengers certainly end up deserving their place in the Marvel universe.
Being compressed into a four-issue miniseries, the story of searching out the gems itself gets a bit lost under the banter and character development of our team.  A few points get a bit confusing, but the ride is fun enough to go along with it.  What is almost better is the one-shots that follow, which each deal with a different Pet Avenger on their own.  Watching Throg go back to his colony and see how having a protector has affected them is one of the best issues in the book.
Following the one-shots is an encyclopedia of Marvel animals.  The reading is a bit dry, but it's certainly a reference that Marvel fans might want to have.  Some entries are more interesting than others, but it's a great place to pick up the little bits of trivia that fans love.
Highs:  Ms. Lion's introduction to the team.  And the clarification of his gender.
Lows:  Without a general idea of who the pets 'belong' to (and the term pet is used rather loosely here), some of the subtext is lost.
Verdict:  A hilarious, fun treat that comes along once in a great while.
Further Reading:  GLA - Great Lakes Avengers #1 (Misassembled)
Posted by ebooksgirl at 3:30 PM