Newford gets a visit from Australia 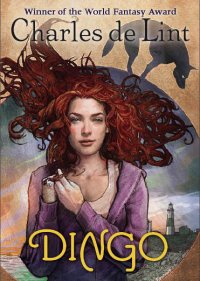 While this is the 22th book in the Newford world, it is certainly accessible to first time readers of Charles de Lint's work.  While there are no real spoilers that I could tell, there may be some that I missed, so be warned.  Otherwise, read on.

Miguel is the 17 year old son of Newford's record and comic book store owner.  He tends to spend his evenings after school tending shop or hanging out with his two best friends who, in the tradition of High School relationships, have recently started dating each other
His life changes forever, though, when Lainey walks into the store.  Having recently moved to Newford from Australia, she's red-haired, clever, and has an almost too smart dingo named Em with her.  Miguel and Lainey hit it off immediately, and plan to meet up another day outside of her very protective uncle's house.
Of course, nothing's that easy in Newford.  Because Lainey and Em are cousins, part of the magical group of animal-human spirits who belong both here and in the spirit world.  Each girl has fallen for a boy (Em likes a bully with an artistic side name Johnny), and if they are going to be able to finally settle down in one place, they'll need both Johnny's and Miguel's help to defeat the Dingo spirit determined to use them to free himself from a prison in the spirit world.


If this sounds just a little bit trite and overdone, that's because it really is.  Mind, some of the characters here are fantastic.  I really like how Miguel's father is a bit wary of what his son is getting himself into, but is ready to back him when things get really tough.  Both the ending in the spirit world, and the resolutions back home in Newford are pretty well done as well.


The problem is, de Lint has already shown that he can do Young Adult fiction that is just as good as his adult works.  Both Little (Grrl) Lost and The Painted Boy stand well on their own, with a cast full of well-developed characters and much better laid out plots.  Perhaps if he hadn't kept the book so short, it would have worked out better.  At a little over 200 pages, it feels more like a novella that he couldn't quite pare down enough to fit into a short story collection.  It's a quick enough read, though, so if you need something to keep you occupied for a plane ride, it'll do.


Highs:  Even if he doesn't see it, Miguel does have the coolest father ever


Lows:  Feels like a good start to a novel that could have been fleshed out more


Verdict:  Give a teen The Painted Boy to introduce him to de Lint