Manga Monday: At what point do people stop betrothing their children to random people, anyways? 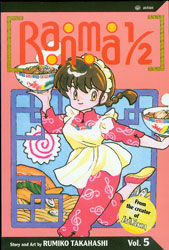 As we left off in Ranma 1/2 Volume 4, Girl-Ranma is locked in battle with Cologne to win the Phoenix Pill from her.  Cologne's been around the block a few times, though, so when she uses the 'Shark Fist Technique,' there's real sharks involved.  But fatal weaknesses can also be strengths, and Ranma does have a very convenient, as well as clingy, cat nearby so maybe he can figure out something.
As Ranma and Genma make preparations to go train in the mountains, Akane's father tells her to go along with the guys to do the cooking.  It would be good training for her as a future wife, and from the reactions she's been getting to her food, it looks like she needs all the practice she can get.  Then again, anyone could mistake vinegar for wine, right?
Ryoga's out in the mountains training too, and Cologne's teaching him a neat new trick.  She tells him that every object has a 'Breaking Point' that, when hit, causes it to shatter to pieces.  She demonstrates it for him on a boulder, and Ryoga starts thinking that perhaps the old lady has a few things to teach him after all.
Even without Ranma's enemies teaming up against him, Ranma is able to find plenty of trouble to get himself into.  After being nearly trampled to death by a runaway horse, Girl-Ranma wakes up wearing a wedding kimono!  Shentaro, the only heir to a partial arts tea ceremony dojo, has kidnapped Girl-Ranma as a replacement for, yes, his own unwilling bethrothed.  Can Ranma learn to fight in this style in time to save Sentaro from an all-to-famililar fate?
With Volume 5, the series takes a step back from the almost normalcy of Volume 4 and returns to its fighting roots.  The sense of humor stays the same, of course, and Ranma will never be able to stop picking up suitors wherever he goes, but that's the point.  Besides, where else would we go to watch someone battle a hive of bees to learn to dodge attacks?
Highs:  I wonder if a girl as tomboyish as Akane would be any good at tea ceremony?
Lows:  Did Cologne really need to hang Akane from a tree as a prize while Ryoga and Ranma fought?
Verdict:  Back to the normal grind of learning new, bizarre martial arts techniques
Further Reading:  Urusei Yatsura, Dragon Ball
Posted by ebooksgirl at 10:32 AM