Manga Monday: Who knew a university of future superheroes would have so much drama?

In a world where super heroes are a fact of life, it would make sense that there would be institutions to teach  them the best uses for their powers.  And depending on the levels of young person’s powers, there would by necessity be universities of differing prestige. 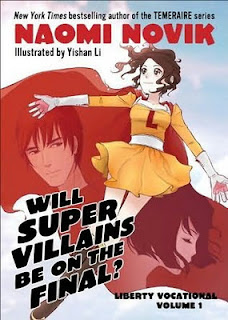 Welcome to Liberty Vocational, seen here in Vocational Volume 1: Will Supervillains Be On The Final? This is the Ivy League of Superhero Universities.  And being accepted at 16, Leah Taymore is a prodigy.
Well, her powers are, at least. Leah, being younger than most anyone else on campus, is terribly awkward and a step behind from the moment she steps foot on campus. Granted, having co-ed dorms makes sense, when so many superheroes end up on teams and have to get used to the idea of sharing bunks and changing together eventually.  It’s a little hard for Leah to wrap her head around at first.  Having grown up with very low level parents, she is hardly prepared for the reality of a campus full of powerful superheroes-in-training, but she is ready to do her best.
We meet a few people during her first days on campus.  There is her roommate Yuzana Myat, a Bermese empath who tends to “listen in” on her classmates, but genuinely likes Leah, and helps her out.  In her chaotic first day, she also has time to find a male classmate named Paul Lyman to start crushing on.  Which, admittedly, is probably to be expected of a 16 year old girl.  We get to see a few of her classes, which run the gamut from ethics to costume design, and meet a rather terrifying dean.
But not all drama is confined to campus. When rains start to send the nearby river out of its banks & Leah is the only one on hand to stop it, will she risk being expelled to save the town?  And why does it seem like everything Leah does somehow gets undermined?
Vocational Volume 1 throws a whole lot of plot into under 200 pages of comic. Having never been serialized, it has a different flow than most manga, but plenty of plots are established to let the series go for quite a long time.
Highs: The stories do well at showing many parts of a university experience, including both the class time and personal time
Lows: It really feels more like an illustrated novella than a proper manga, with odd pacing issues and not enough explanation of what Leah’s powers are actually doing
Verdict:  Even with it’s flaws, the story so far is enough for me to want to know what happens next
Further Reading:  His Majesty's Dragon, Howl's Moving Castle
Posted by ebooksgirl at 11:08 AM