As war ravages the Continent, black magic is left to fester in the countryside

Fairy tales weren't always Disney-inspired fripperies. Many of them were cautionary tales at their heart, or even just involving the dark side of the fantasy realm. Mercedes Lackey's Elemental Masters series has certainly taken a turn towards these darker fairy tales at times, and returns there with Unnatural Issue, the sixth book in the series. 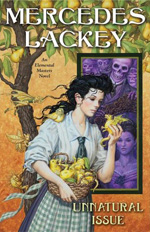 While this is the 6th book in the Elemental Masters series, it is certainly accessible to first time readers of the series.  While there are no real spoilers that I could tell, or anything beyond basic 'fantasy world magic' to know, there may be some that I missed, so be warned.  Otherwise, read on.


Time, and war, marches on. As England braces for the atrocities that she's seeing happen on the Continent, fewer and fewer Elemental Masters are left in London to keep matters of the homeland in check. Perhaps this is why such a blight as Whitestone was allowed to persist as long as it has. When the Earth Master Sir Richard Whitestone's wife passed away in childbirth, he disowned the baby girl who stole his love from him and cloistered himself away in his rooms. With the dark energy his mourning brought to his lands, the grounds of his manor became as blighted as his soul.

Thankfully, the innocent baby too had the gift of Earth magic.  As soon as she was old enough to wander away from her servant caregivers, Susanne is drawn to the clean areas farther away from the house. Such a young one out on her own certainly drew the attention of the magical beings in the area, including a certain very powerful Earth spirit.

This easy relationship with magical beings will serve her in good stead as war spreads across the continent, as well as closer to home. For her father has found a way to bring the love of his life back from the beyond. It involves doing some terrible things to call enough magical energy to himself, but anything would be worth it to get her back. He needs to call her spirit back and channel it into a new vessel. Preferably one close to the deceased, and as the number 7 is a very powerful number, a 21 year old vessel who is a spitting image of her mother would be perfect.

When Whitestone starts grooming her for the gentry after having ignored her all her life, Susanne becomes rather suspicious. And when her suspicions are confirmed, she runs for her life, directly into the most magical of households.

The story that unfolds tracks both the brutality of the war raging across Europe along with the undead war that has been launched to bring Susanne back to her father. Most of what you would expect in an Elemental Masters story comes through here, too. We have an independent, yet still feminine, heroine who befriends more well-trained Masters to help her. We have the stereotypical evil villain who is using a perversion of his Elemental magic to his own ends. And there is a budding romance, though perhaps not the immediately obvious one.

None of the Elemental Masters books have been particularly deep, and this one is no exception. Even though it is darker and has more to do with the horrors of war than some previous ones have, it's still a fairy tale confection at its heart. But with that in mind, it's a well-written diversion from the mundane aspects of life.

Highs: Watching Susanne realize exactly what sort of household she has run away to.

Lows: The romantic aspect of the story is rather silly, but exactly as one would expect.

Further Reading: Soulless, Emma: A Victorian Romance
Posted by ebooksgirl at 9:00 AM