Even alien judges can be found on the golf course

When last we saw Judge Nugan Bufan Sn, he was perhaps the happiest Judge in the Common Confederation. In a universe thousands of years old, most case law has been hashed out centuries ago. All judges get to do, especially in a backwater such as Earth, is apply the same statutes over and over again. Simply put, there's not much new under the suns.

But as backwater is humans are, we can still be surprising. And by a strange twist of circumstance, Judge Sn actually got to create new law in The Android's Dream. 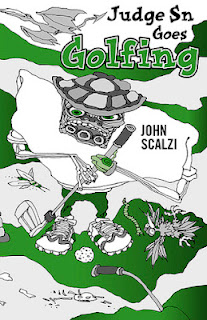 Here, in 'Judge Sn Goes Golfing,' we get to see the person behind the robe.

It turns out, Judge Sn isn't the nicest person off the bench, either. After his landmark case, he's still stuck on the provincial planet of Earth. In fact, now that his ruling has been accepted case law, he will forever be tied to the planet.

Well, at least Earth has some decent golf courses on it. He'd know; he's been permanently banned from almost all of them. All he has left in the vicinity is a course that's so terribly planned, so badly maintained, and so badly managed that even the outcasts of the golf circuit can still get on the course. Poor golfing skills, combined with a bad temper has gotten him exiled to this disaster of a course.

But even the worst golfers occasionally get an amazing round. And he'll be damned if he lets a few assassins get in the way of the game of his life.

'Judge Sn Goes Golfing' doesn't add all that much to the universe of The Android's Dream. Rather, it feels like an unnecessary scene cut from an already full book. That doesn't make it any less fun to read, though, and fans of Scalzi's other works should enjoy this foray into the universe as well.

Highs: Such introspection in one simple round of golf...

Lows: I've seen what the rich and powerful can get away with, and it's a bit hard to believe that EVERY course has kicked Sn out, especially after the ruling.