Manga Monday: It makes sense that Alexia would end up hanging off the side of an airship

We meet Lord Maccon's former pack, and they have a most peculiar problem on their hands in Gail Carriger and Yen Press' Soulless The Manga Volume 2: Changeless. 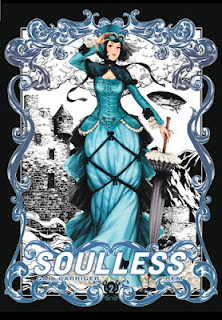 Lord Maccon's former pack up in Scotland, however, is having a bit less luck with it. In fact, they've stayed human for some time now. No more losing control and turning at the full moon. No more pack politics and the problem of no one being powerful enough to take the Anubis form and create more werewolves of the line.

After Lord Maccon leaves Alexia behind to deal with his old responsibilities, she decides that a trip to the North might do her some good. Of course, Alexia can't manage to do anything by half measures, and eventually her retinue grows to include Ivy, Mr. Tunstell and even her sister.

The pack has suffered for not having a true Alpha for so long. Sidheag, the last of the family line, has been trying to hold them together, which has been difficult; the common belief is that women are too delicate to withstand The Change, and even if she were to successfully become a were, that would mean the end of the bloodline in Scotland. And Connal is not willing to bring either of those ends about. But in refusing to turn Sidheag, has he instead doomed the pack to a slow death by infighting?

The more pressing concern, however, is the inability of anyone in the area to turn. It's as if someone has harnessed the power of the preternatural and amplified or broadcast it over a huge area. It's up to Alexia, Connal and their merry band of compatriots to figure out what's breaking their curse and stop it once and for all.

Once again, Soulless: The Manga follows the story of the book, giving image to the characters we've loved. We get to see the inside of Madame Lefoux's hat shop, Sidheag's imposing yet plain visage, and the atrocities Miss Hisselpenny insists on strapping to her head. Much of the story ends up on the cutting room floor, so to speak, to keep each volume at a manageable length, so it still works best as a supplement to the novels. Even as such, Soulless the Manga Volume 2: Changeless is one of the only Steampunk manga out there, and is a must-read for fans of the Parasol Protectorate.

Highs: Sidheag, the woman trying to hold her family together, adds to the long line of strong female characters in this series and perhaps deserves a series of her own.

Lows: Again, quite a bit has been lost in the adaptation, but it can't be helped.

Verdict: A fun read, but not a replacement for the novels by any means.