“Dorothy lived in the midst of the great Kansas prairies, with Uncle Henry, who was a farmer, and Aunt Em, who was the farmer's wife.”

L Frank Baum used this line to start his most famous work, The Wizard of Oz. Now, Mary Robinette Kowal uses this same line to start a whole new story, 'The Lady Astronaut of Mars.' 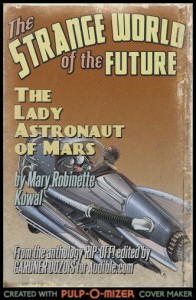 Here, the space program played out a little bit differently. Instead of simply being content with reaching the Moon, humanity kept pushing out into space. While computers were still in the punch-card phase, man reached Mars and eventually colonized it, beneath bio-domes to keep in the air.

Elma York was the face of the Mars program. With the mind of a scientist, the heart of an explorer and the looks of a starlet, she was the perfect choice to be the face of the colonization program, along with her computer-science husband.

Fast-forward several decades and their lives have become the same as any couple in their later years. Elma keeps in shape for her NASA-compliance physicals, and also to help take care of her husband. While his mind is as sharp as ever, his body has begun to betray him. The tremors have gotten so bad, and his muscle mass has gotten so low, that he is transitioning into 'it's a matter of time' territory.

But how much time? Because NASA has a new project in the works. They need a person to make a one-way trip to the nearest star system, to set up an array to facilitate travel. Does Elma live out her marriage with her slowly dying husband, or take her last chance to fly among the stars?

Mary Robinette Kowal's talent lies in finding the humanity in her characters. Whether they be a clockwork toy, an IT girl on a generational ship, or a woman living on Mars, Kowal makes the reader wonder what they'd do in their place. This is the real joy of Kowal's stories, and what keeps readers coming back time and again.

Highs: It's a amazing what a little girl from the Kansas countryside remembers years later.

Lows: I might resent the narrator using her looks in this way, but then again it was the 1960s.

Verdict: Very much worth the read, for free, on Mary Robinette Kowal's site here.

Further Reading: 'Paper Tiger', Shades ofMilk and Honey
Posted by ebooksgirl at 9:00 AM