Sometimes it takes a little magic to save the scientists

There's magic and treason in the air, and it will take both a sorceress and a genius to resolve it in Lilith Saintcrow's The Iron Wyrm Affair. 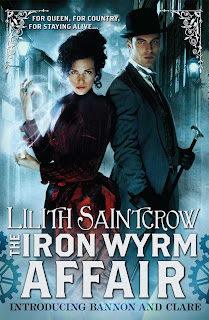 Emma Bannon is a Prima Sorceress, able to control the magic that is infused into the world with each sunrise. With a focus on Black Magic, Bannon is in the service of Brittania. With her Shield by her side, Bannon is one of many Primes who take care of matters that need a certain magical touch.

Doctor Archibald Clare is a mentath. A genius of staggering proportions, he uses his powers of observation to make amazing connections and deductions. No longer in the service of the Crown, Clare has had very little to occupy his faculties, and has been suffering for it as of late.

Author Lilith Saintcrow has created an alternate Londinium full of clockwork-enhanced dock workers and a spirit of Brittania that is passed down from host to host. In fact, Saintcrow has packed so much universe into this book that at times it gets in the way of the story. I spent way too much time trying to figure out exactly how her magic, and the charter-charms, and the distraction took me away from the delightful characters and well plotted mystery. Usually, I think that a book should stand alone without an 'info-dump' intro, but perhaps this is one time where the reader would have benefited from an introduction to the world.

In the end, though, The Iron Wyrm Affair is an intriguing steampunk mystery with enjoyable characters and refreshingly little romance, that leaves the reader wanting the next book, if only to help clarify how the world works.

Highs: The mentath Clare is all the bumbling genius one comes to expect, but never seems to irritate the way that the stock character type can

Lows: Saintcrow needs to better define her world in the next book, or she'll surely lose readership

Verdict: There's better steampunk stories out there, but if one is running out of things to read, she could give this one a try

Further Reading: Soulless, Boneshaker, God Save the Queen
Posted by ebooksgirl at 8:30 AM