A shadowy presence, and a string of deaths, may doom a young lady's portrait studio in Cindy Spencer Pape's second 'Gaslight Chronicles' story, 'Photographs and Phantoms.' 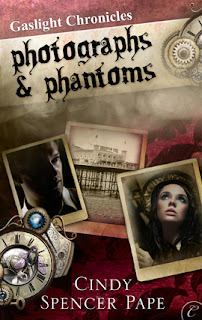 Note: 'Photographs and Phantoms' is the second story of the Gaslight Chronicles series. While the stories work well as stand-alones, there are inherent spoilers, especially where the romances are involved.

MIss Amelie Deland loves photography. Whether landscapes or portraits, the career she's built for herself is more than enough to supplement the allowance she receives from her family. She's set up shop in the back of a boardinghouse in Brighton, where she's found herself a lovely mix of holidaymakers and locals as her clientele.

Recently, though, word has been getting back to her that an unusual number of her clients have been passing away. At first, there doesn't seem to be any sort of commonality between them. Some are visitors, others are locals. One is a baby, while another is a newlywed. But to Amy’s horror, as she looks at the photos of the recently deceased, each one shows a blur, almost like a serpent, over the image of the person fated to die.

Kendall, Marquess Lake, is a Knight of the Order of the Round Table. As he's gotten older, he's had to shoulder more responsibilities, both as the heir to the Duke of Trowbridge and in his position in the Order. While he still prefers the more straightforward cases he used to take on, he's sent to Brighton to check up on Miss Deland as a personal favor to one of his father's friends.

As with the rest of the 'Gaslight Chronicles' stories, we're treated to a few old friends from Steam and Sorcery, as well as being introduced to new characters who will show up later. London, and even the UK itself, isn't that big a place, growing smaller each year with the increase of trains and airships to move people from one area to another. Pape's world is full of little bits to discover, and a pleasure to read.

Highs: A perfect introduction to the 'Gaslight Chronicles' for those who just want to check it out, it's available for free at many ebook websites.

Lows: More so than in other stories, Amy Deland ends up being saved more than fighting for herself.